I suppose in some sense, my love of Broadway and the Tony awards is stereotypical for confirmed bachelors of a certain age… But it also stems (again, somewhat stereotypically) from the love of performing arts that I developed as a teenager – the performing arts department in my high school was a refuge, a place where I could be myself and be lauded for it, rather than called sissy or faggot. And singing in the choir, acting in the school plays, taking drama class every single semester – it forced me to be brave, to do things that were intimidating, even scary, but that always left me feeling like I’d accomplished something, that I’d conquered some part of myself.

And it’s my own recollection of being on stage that makes live theater such an exhilarating experience – especially when it’s on Broadway, where some of the finest actors in the world perform eight shows a week. Whether it’s a comedy, a tragedy, a lighter-than-air musical or special-effects driven spectacle, my feeling when the lights go down is always the same – a pounding heart, always a bit (sometimes more than a bit…) teary-eyed as I think, “How lucky am I to be here at this moment?”

At any rate, last night’s Tonys were amazing – obviously more so than usual for me, since I’d seen three of the nominated plays. Neil Patrick Harris is a national treasure and frankly should host every awards show – except for those hosted by Hugh Jackman, who was just as great. Ellen Barkin’s acceptance speech after she won for The Normal Heart had me in tears. Nikki M. James, who won for featured actress in a musical, gave a delightfully kooky speech. Sutton Foster singing “Anything Goes” as she and the ensemble tap-danced into my heart had me cheering from my sofa. And Chris Rock had the best line of the night as he presented the award for best musical. It was pretty much a forgone conclusion that The Book of Mormon would (correctly) win best musical. Before reading the nominees, he said, “This is such a waste of time, like taking a hooker to dinner.”

And then there’s this – Frances McDormand’s post-win mugshot from backstage. How can you not love this madness? 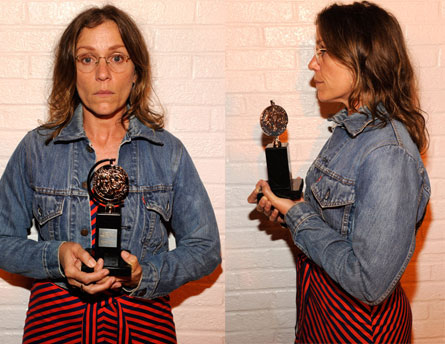 And enjoy these clips of NPH showing how this awards-hosting business is done – along with a little help from Hugh Jackman. So swooning…