Logan Morrison of the Florida Marlins has an unsettling encounter in the dugout.  Also, so moded… and exactly how I would react in the same situation.

I just love this photo. It’s like a picture of inside my brain every time I ride Muni. But in fact, it’s just some hot dude diving. See more amazing facial expressions here. Oh, and also Matthew Mitcham is my imaginary boyfriend… 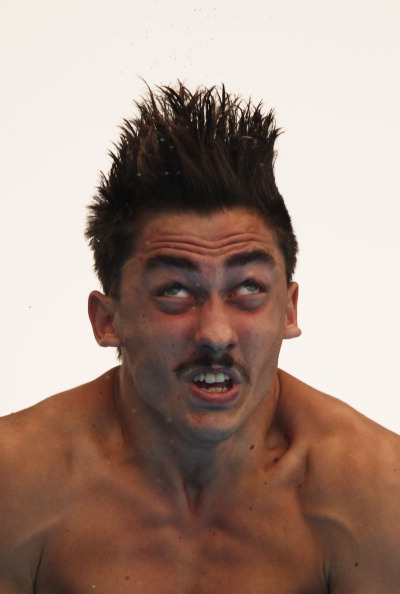 I’ve run into a bit of a wall here – don’t have anything interesting to post. So, here’s a hilarious dog video!

So, I think we’ve all heard about (and been creeped out by) the recent marriage of 51-year old actor Doug Hutchinson (if you look up “pervy old dude” in the dictionary, you’ll see his photo. Also, he has an anus mouth) and 16-year old Courtney Stoddard (yes, she is actually 16, despite looking like a 40-something OC divorcée and plastic surgery buff). And it comes as no surprise that they are trolling for a reality show – because, as we all know, appearing on TV – no matter how horrible, desperate, despicable or dimwitted one is portrayed – is the only true measure of success in these United States.

Anyway, the lovebirds (vom) have been giving interviews left and right, declaring their deep and genuine love for one another. And this animated GIF is mesmerizing. Is she having a series of small strokes? Is she being “sexy” (and doing a really fine job of it!)? Is she just so ecstatic over her good-fortune in marrying such a magnificent specimen? Did she just have dental work done and the Novocaine hasn’t worn off? All of these? I don’t know! But I can’t stop watching…

TOYGERS! Cats bred to resemble toy tigers! ROWR! Grrrrr… Though of course I’d never spend $800 for a kitten when there are plenty waiting for adoption in shelters. But still – that tiger cat sure is purrr-dy!

A couple of guys robbed a smoke shop in So Cal – but didn’t get much money when the store owner’s Chihuahua took matters into his own paws.

At one point, one of the robbers even points his rifle at the diminutive but undaunted pooch, who chases the pair out of the store and down the street.

from LATimes via The Awl

OK, I realize I’m probably posting too much from musicals – but mon dieu! How can anyone resist this number? I DON’T KNOW! Even if you hate the music (i.e. if you are insane), just look at the tugboat scene. This is all real! They had a helicopter flying over and around that tugboat while Babs sang her heart out in NY Harbor! And it is flawless.

I’m sure it comes as no surprise, but my first order of business after winning the lottery is to have a custom-made bias-cut orange dress and fur hat and muff designed just for me so I can re-enact this scene. And yes, I’ll be buying a tugboat and painting it turquoise (duh).

Also, I’m hoping that I can re-use that orange dress – make the hem a little higher, add a big white hat, turn the original skirt into a layered shawl – just like Babs did in On A Clear Day (it is the same dress, right?). Seriously – it’s the same dress, isn’t it? WHO CARES? It is fantastic! Also waste not, want not.

Homewrecking diamond-aficionado and soon-to-be-former candidate for first lady Callista Gingrich has apparently “written” a children’s book, Sweet Land of Tiffany Liberty, which “takes children on an entertaining and educational journey to introduce and explain the greatness of America.” Presumably, the journey includes convincing a fat serial adulterer to leave his second wife for you and a trip back in time to a 1960s hair salon.

Whatever the case, El Pinche made the best comment of the day at Wonkette:

I think I’d like to get a t-shirt that says “Super Honkey.” 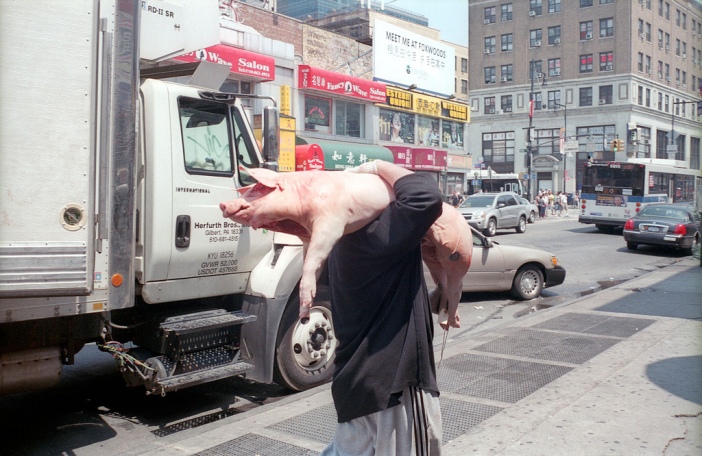 Betty Ford seemed pretty cool for a rich Republican lady – may she rest in peace. But this photo that accompanied her obit was fascinating to me. She’s shown here with her husband, recovering from her mastectomy – at the Bethesda Naval Hospital. Now THIS is a hospital room! Seriously, of the many perks that go with being rich and/or living in the White House, this one looks pretty great – that room is larger than my apartment! And luxurious bedding! And all those pillows! And no disease-ridden stranger in a bed three feet away, separated only by a thin curtain!

Not that I need another reason to love New York – but these are great.

My neighborhood Whole Foods recently changed the check-out procedure. Rather than individual cashiers each with a separate line, they adopted a modified bank-teller-line method: two long rows of cashiers with a single line waiting for all.

They had to make one concession to the layout of the store itself: there are actually two lines, side-by-side, with signs clearly indicating that shoppers may use either lane. Once one reaches the head of one’s line, shoppers alternate back-and-forth as a cashier becomes available. There is usually a Whole Foods staff member to keep things moving.

Sadly, the existence of the two lines is an overly-complex system for many a shopper and they feel a need to introduce their own version of democracy into the line by monitoring the progress of their fellow shoppers in the other line – taking note, for example, that they have moved ahead of someone who was in line before them. Thus an element of chaos is introduced into the previously orderly line.

Just go when it’s your turn! When you hang back out of “politeness” for the person who was “ahead” of you (they were not actually ahead of you since they are in a different line!), it artificially increases the length of your line. So while you’re motives may have been pure, you’ve now delayed the people waiting behind you by violating the social contract of this particular type of line. So please cut it out and just go – GO! GO NOW!!

And while most of the WF employees managing the line run a pretty tight ship, the woman in charge the other day (who was as nice as could be) at one point asked, “Who’s next?” This is wrong! As the line-wrangler, you have an obligation to maintain a laser-like focus on the line at all times and ensure the lines always alternate. Otherwise, it’s a quick slide into anarchy and we’ll all be living in caves, venturing forth only to fight each other for the scraps left behind by the giant nuclear rats. 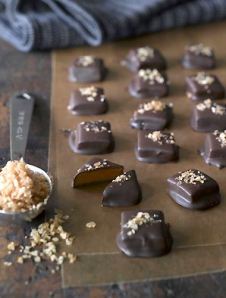 I can’t believe it’s taken me this long to post about Hooker’s Sweet Treats, located right here in the ‘Loin. Obviously, the name alone is enough to earn a solid thumbs up.

And the chocolates – oy, the chocolates! Only two varieties – salt caramels and the recently introduced mixed nut caramels. Both rely on the same buttery and perfectly textured caramel. The salt caramel is enrobed in dark chocolate and topped with the exact right amount of sea salt. The nut caramel looks simple enough: a cube of caramel with mixed nuts (obv) but – surprise! – there is a thin layer of chocolate on the bottom. They are sublime. I am obligated to bring them on every visit to NYC – Ralph has advised I am not welcome if I don’t have a box of them in my suitcase.

And then there’s this, from Saturday’s article in the Chronicle about the “trendy” Tenderloin (WTF? Though the article is by C.W. Nevius, who is, for lack of a better word, a tool, so whatevs..):

This month David Williams will celebrate his first anniversary at Hooker’s Sweet Treats. Who knew you’d need to go to lower Hyde to score some awesome hand-dipped, sea-salted caramel candies? But there have been a few Tenderloin moments, like the woman who hit Williams in the face with her purse. That began when he asked her to move along.

“You’re just hassling me because I’m black,” the woman said.

“No, it’s because you’re smoking crack in my front door,” Williams replied.

Ain’t it the truth. And congratulations to Mr. Williams for reaching the one-year mark.

Oh, Hooker’s also serves coffee and baked goods. I haven’t had a chance to try yet – but apparently a semi-regular offering is coconut-pineapple bread pudding. Um, yes please.

If there is one second in this performance that is not sublime, I have yet to see  it. I mean, really – Ethel Merman! Donald O’Connor! Dan Dailey! Johnnie Ray! MITZI GAYNOR! Obviously as a francophile, I have a bit of weakness for Miss Gaynor’s performance – and the high-kicking in heels just amazes me. Every time I watch this, I can’t believe it actually exists because it is perfect. And that’s not even mentioning the fact that this quintessentially American song was composed by Irving Berlin, a Russian Jewish immigrant. USA! USA!