Today’s agenda was rather similar to yesterday’s – though this morning we had a food tour! Our guide Vu from Vietnamese Street Food Tours met us in the lobby promptly at 8AM. This was one of the few tour companies that had options that didn’t require traveling by scooter. Now, I’m all for adventure and trying new things when I travel, but I’m also pretty focused on remaining alive – so today’s walking tour was much more my speed.

We first went by taxi to District 4 but the remainder of our morning was spent on foot. We started off having what our guide told us were called Cambodian noodles. Really good – a little spicy, a little sweet. I did refrain from eating the pork intestines that are one of the ingredients – I’m not as adventurous an eater as one might hope.

We continued through the market area and tried lots and lots of different things, including a really nice banh mi, traditionally-prepared Vietnamese coffee and the best phở I’ve ever had. According to Vu, Phở Mùi is well-known (and typically mobbed for breakfast and lunch) thanks to the 14-hours the broth spends simmering. It was really delicious with a depth of flavor unlike any other phở I’ve tried. Really amazing!

Wrapped up our morning with a wee dessert: egg custard, served in an eggshell. Really yummy and just the right amount after all we’d eaten over the course of our walk.

Tours like this are a great reminder to me of how lucky I am that English remains the lingua franca of travel (though I suspect Chinese will soon replace it, given the huge number of Chinese citizens who travel internationally). Wherever I go, there’s a high likelihood that some locals will speak enough English to communicate – and I can always find a guide who is fluent, like Vu. I always enjoy hearing the vocabulary used by people who speak multiple languages – in this particular instance, Vu observing (accurately!) that Ak’s floral-printed sneakers were “outlandish.” I have to remember to use that word more often!

Ak and I spent the afternoon at the War Remnants Museum. It’s absolutely a must-see for anyone visiting HCMC, but it is also harrowing. I suppose to some extent this is especially true for me as an American – it’s hard to fathom the horror of war, especially one where the underlying reason was largely, “We don’t like the form of government you’ve chosen for yourselves.” The most dispiriting thing is realizing that the U.S. government appears to have learned nothing from what happened in Vietnam. We continue to intervene in the business of other countries that don’t want us there with no clear strategy of what we’re doing.

There was an excellent (and extremely difficult) exhibit focused on journalists who had been killed while covering the war. Seeing their work preserved and their stories memorialized felt agonizingly personal. I had to stop a few times to regain my composure – but it was a very effective presentation that should not be missed.

We spent the rest of the afternoon mostly wandering about District 1. Despite the crazy traffic, HCMC is actually pretty nice for walking. There seems to be regular greenspace and still plenty of charming old buildings and tree-lined streets. It was a nice way to decompress after the museum.

Before dinner, we stopped for a cocktail on the roof of the Rex Hotel. A nice view of Nguyễn Huệ Street from our table and decent cocktails – though I did manage to not only knock my drink over, but to shatter the glass in the process. Ugh, I’m a disaster!

Dinner at Quon Bui. We managed to get into a taxi just before a really epic downpour. Happily, our driver got us right to the front door and the restaurant had someone stationed out front with an umbrella to shield arriving patrons. Sadly, though, the weather put the kibosh on our plans to dine al fresco on the roof.

But the room was lovely and we enjoyed a great meal. We totally over-ordered, not realizing how big the hotpot would be – but the fish and noodle with greens was really delicious.

Made an early night of it, returning to our hotel to share the tiny cake we’d pick up while out shopping earlier. It was beautiful to look at, but rather ordinary tasting – plus, in a highly illegal move, it contained no layers! RUINED.

Saturday was our last full day in Vietnam. Ak and I had contemplated visiting the Mekong Delta. There was a bike tour that sounded great – but weather seemed really iffy with possibly torrential rains plus the bus ride there was two hours. We decided to save that trip for next time and just spend our day exploring Saigon.

We didn’t venture too far afield. Our first stop was for phở for breakfast at a place next door to our hotel. As is so often the case here, it was away down a narrow alley that turned it another quite charming little alley. The hidden location along with the pastel pink and green interior of Phở Minh really made it seem like we were far away from hustle and bustle of the streets of Saigon. It was wonderful.

Our server recognized that we were not Vietnamese speakers, so she just confirmed “Phở?” and we nodded. She first brought us some delicious little meat pies that I discovered are called bánh pa tê sô – which is from the French “pâté chaud.” And then nice big bowls of phở – which were tasty, though yesterday’s phở remains the winner.

We spent the morning visiting a couple of museums. First up, the Ho Chi Minh City Museum of Fine Arts. It’s in an impressive old building that was originally constructed as a residence for a wealthy businessman and his family in the early 1930s. The collection was mostly contemporary art and I did enjoy some of the collection – though there wasn’t a whole lot of information on what was being shown or how the works were organized. Of course, given that I’m good friends with more than one paintings conservator, I was made very uncomfortable by the fact that the only climate control for the galleries was ceiling fans and open windows…

Next was the Gia Long Palace, another gorgeous old building housing some exhibits of propaganda material and the history of the city. We had a quick look around before deciding we needed to refuel with a frozen coconut coffee at Cộng Cà phê… which was right next door to building that I’d seen the other day, former home of a CIA apartment and the roof of which was used for helicopter evacuations during the Fall of Saigon. It still boggles my mind to imagine that this beautiful and charming neighborhood was a war zone when I saw it on TV as a child.

We found a charming little place next to the hotel called The Old Compass Cafe – it’s run by the same folks who run the website The Rusty Compass which is an invaluable resource on things to do in Vietnam – especially restaurants. Down an alley and up a few floors in an apartment building, it’s another one of HCMC’s many, many little hidden gems.

Back to hotel for a swim in the quite lovely rooftop pool, along with a snack at the bar. Then a foot massage at an unmemorable but adequate place nearby. Then, time for dinner!

Tonight we ate at Chi Hoa. Crispy rolls, really excellent bbq pork ribs, steamed bánh mi (which was not as interesting as it sounded), shrimp and some delicious clams. A really great dinner!

Sadly, this was our last night in HCMC before flying back to Bangkok. We’d had three full days here – and honestly, as much as I enjoyed it, I wish we’d had more time here. There’s lots more of the city that we didn’t see and plenty of nearby places to visit outside Saigon. I really liked it here very much. It’s definitely a big noisy city – but there are trees and greenspace, lots of great old architecture and every alley and nondescript building seems to contain a cool bar or restaurant or cafe or shop or something. It’s a city that I hope to come back to and learn more about. 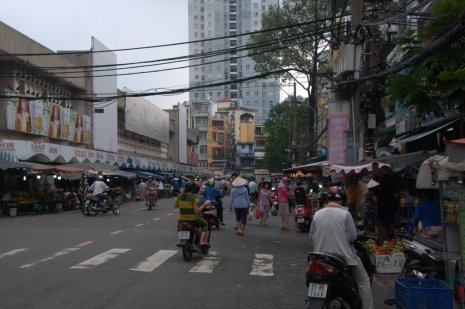 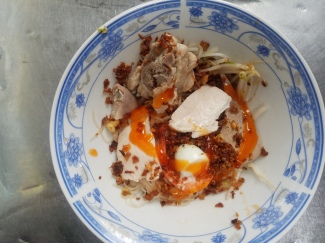 Our guide Vu with Ak 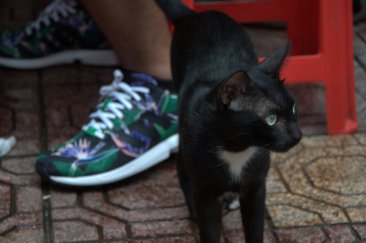 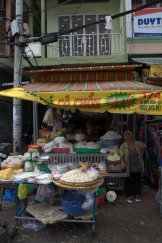 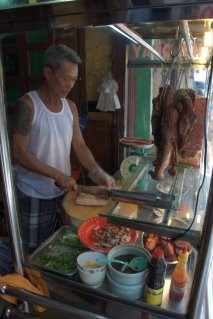 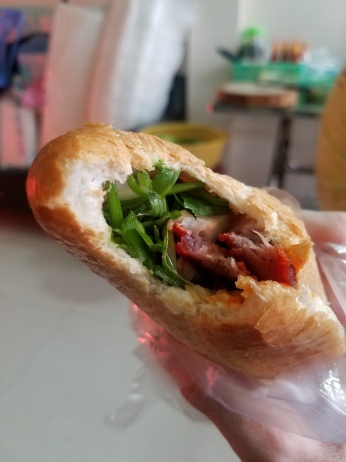 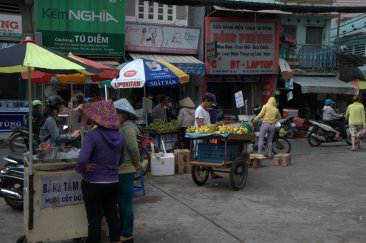 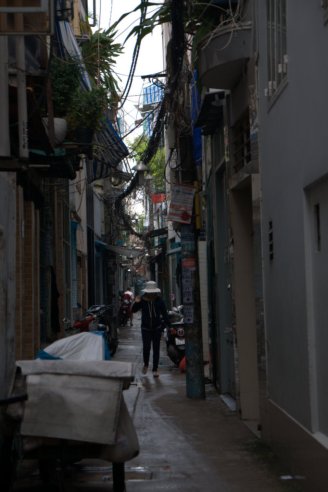 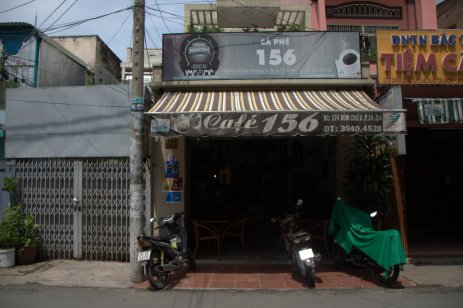 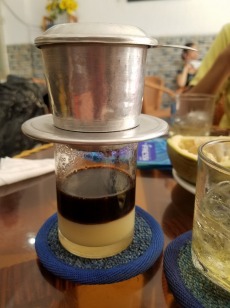 Enjoying each others’ company… 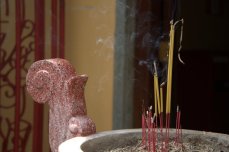 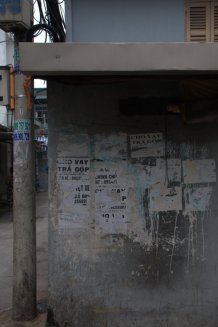 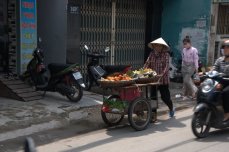 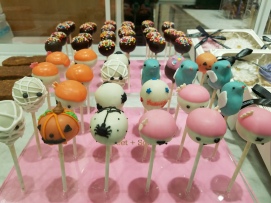 Sweets for the sweet 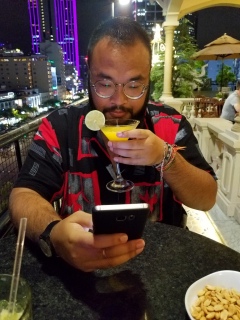 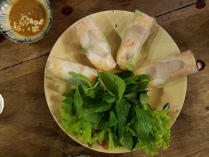 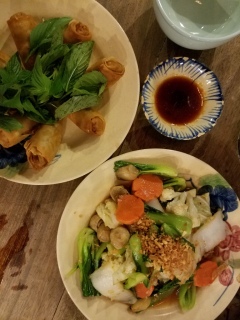 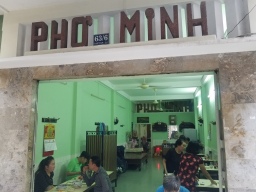 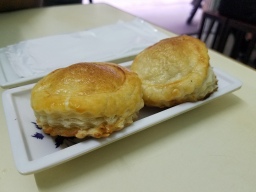 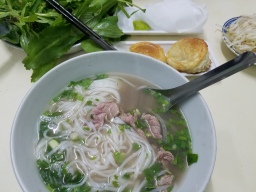 “What are you looking at?”

At the art museum 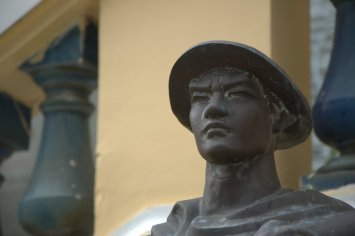 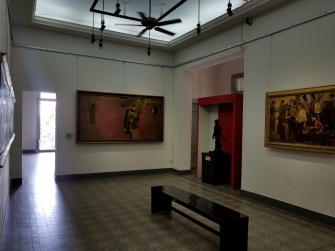 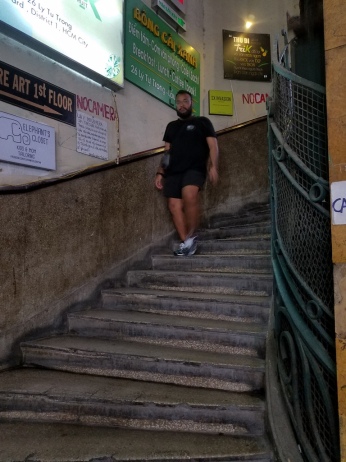 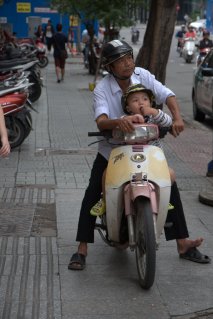 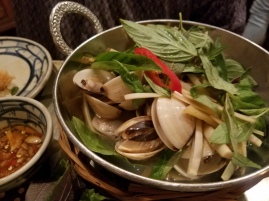 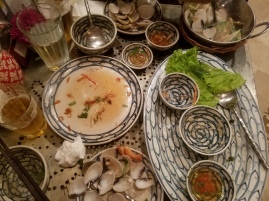