Today, we visit the Singapore Zoo. We started nice and early, stopping first for an “eh” Western breakfast at a place across from the hotel that had the decided advantage of opening at 6AM – which includes the bar, as was evidenced by a patron – no, not me or Ak – ordering a Singapore Sling at 7AM.

Hired a Grab to take us on the 25 minute drive to the zoo and had quite the affable and chatty driver who shared some history of Singapore with us. All went well until the subject drifted to politics – and while I wouldn’t go so far to call him a Trump supporter, he did opine that the “mainstream media” had somehow portrayed DJT in some kind of unfair light. *ahem* Rather than removing my earrings and whooping a trick, I simply stated that I’d been following his activities since the 80s and that he’s a con artist pure and simple. The driver changed the subject – though sadly it was to share with us his philosophy that is one of the many variants of “The Secret” and the power of positive thinking. Eventually, we steered things back toward Singapore and tourism which seemed a safer subject all around.

Arrived at the zoo at just about exactly 8:30AM, right when they open – though the ticket windows were not yet open, which was a tad annoying. I’d actually attempted to buy my tickets online but had been foiled by the site’s rule that only one-time-use credit card numbers were permitted for purchase. I guess the black market for zoo tickets must be quite active…

Once inside, we spied a couple of varieties of small primates dangling from the trees overhead – really cool way to start things off! Made a pretty much complete circle and saw just about all the animals. The orangutans were fascinating – as were most of the primates on display. They also appeared to be relatively nice habitats considering they were all captive. The white tigers were gorgeous of course, as were the leopards, cheetahs, pumas and lions – though it was hard not to wonder if even these relatively generously sized enclosures were really a reasonable facsimile of the cats’ natural territories.

One of the more difficult exhibits was that of Inuka, the elderly polar bear. He’s in his mid-20s, which is pretty old in polar bear terms – their life span in the wild is 15-18 years. But the habitat felt a bit grim and it was hard not anthropomorphize him with feelings of loneliness. I guess more than anything else, it reminded me of my own personal discomfort with zoos. I am fully cognizant of the value they serve in terms of caring for wild animals and inspiring people young and old to embrace efforts to protect and value animals – but it’s hard not see captivity as a less-than-ideal way of life for a wild animal.

We watched a couple of shows too. The first featured domesticated animals – mostly dogs and cats with a couple of rats and a parrot thrown in – so I was AOK with this display. The rainforest show was a little dicier – seeing non-domesticated animals performing is odd. Though I should add that they weren’t doing tricks so much as engaging in some of their normal behaviors on-cue and rewarded with food. And, let’s face it, who can resist a lemur galloping across a vine suspended overhead?

Had a pretty decent lunch in the zoo – vegetarian biriyani for me and mi goreng for Ak – before heading back into the city. Went for a stroll down Haji Lane, at Ak’s request. “Why did you want to visit here?” I asked. “Is it because you saw it on Instagram?” Answer in the affirmative, which led to my establishment of a new rule: any sightseeing based solely on Ak seeing it on IG gives me the option to say, “I’ll meet you when you’re done” with no eye rolling, resting bitch face and/or passive-aggressive sarcastic comments about ruining his vacation. Happily, though, Haji Lane is only about two blocks long, so soon enough we’d found a mall to pop into for a spot of cha nom yen for me and iced Milo for Ak.

After a bit of a lie-down back at the hotel, we headed out for drinks at ATLAS Bar located at Parkview Square – the high-rise also nicknamed the Gotham Building since it looks straight out of a Batman set. The bar itself is just as spectacular as the online photos indicated – towering ceilings in a large Art Deco space that would look right at home in Rockefeller Center. Hard to believe it’s actually only a few years old. Cocktails were pricey but really tasty – Ak had Scandal Water, essentially a martini tarted up with some champagne… It was obviously delicious. I went a bit simpler, opting for a G&T made with Paper Lantern gin, distilled in Thailand from galangal, lemongrass, Sichuan pepper and other regional ingredients and East Imperial Burma tonic from New Zealand, a more old-school style tonic with less sugar and more citrus. It was great!

Next stop was next door at Mr. Stork, the rooftop bar at the new Andaz Hilton (I’m only linking to them in hopes they’ll read this and someone will apologize- srsly, don’t go there. It’s terrible). The view was as spectacular as the drinks and service were dreadful, I’m sorry to report.

Things started off inauspiciously when we both chose a drink from there list of eight special house drinks: Rhubarb for Ak, Ginger for me. “Oh, we’re out of both of those.” Uh, ok. So, I went with Basil, Ak with Thyme. They were both served sloppily and tasted like not much of anything described on the menu – with Ak’s topped with a sad, wilted sprig of thyme. But what do you expect for SG$20 each? (#sideeyeemoji).

As for our servers, it seemed as though none of the kids working there (and even Ak thought they seemed like kids, so it’s not just my grumpy old man syndrome) had received even the barest minimum of training on how to interact with customers. They weren’t mean per se, but definitely not skilled or polished. After ordering drinks, we ordered some food and the server asked if we also wanted drinks – which I explained we’d already ordered. Not the end of the world, but organization was not a strong suit here. Then, while literally mid-sip halfway through my drink, a third server appeared and shoved the bill in my face.

WTF? Very weird. Anyway, I settled up and we sat and enjoyed the view – and I decided to have one more drink – a glass of wine. When our latest server showed up with two glasses, I explained that I’d only ordered one, which was met with a blank stare, so I repeated that I’d only ordered one. The second glass was then whisked away – which is fine, I guess. But virtually every bar or restaurant where I’ve been served something I didn’t order has typically been met with, “Well, why don’t you have it anyway? I’ll take it off the bill since we made an error.” I mean, it’s NBD, but were they gonna get out a funnel and pour it back into the bottle? OK, actually, maybe they did…

A few sips into my wine, our insistent bill payment enforcer showed up and once again demanded immediate payment. I should also add that this same scene appeared to play out for the other folks attempting to patronize the bar that evening – even the ones who are far less unsavory looking than myself. It was a very peculiar experience and I’ll be quite sure not to return.

We planned to check out the very nice looking wine bar and specialty shop downstairs called So France, only to see they’d posted signs on the front door indicating CASH ONLY due to a credit card machine failure, apparently. Jeez, strike three!

Dinner was at Folklore, a new-ish place specializing in Singaporean heritage food, i.e. the sort of old fashioned local dishes that Singaporeans grew up with at home. It got a write-up in the NY Times recently and seemed worth a try. We enjoyed dinner, especially the sambal fried rice and the sago dessert. We ordered a jug of beer also, only to be advised that there was no draft beer that evening, in keeping with this evening’s apparent theme of “Nope, Try Again” when it came to drinks.

Back to the hotel earlyish, where Ak and I both slept fitfully, thanks to having ordered probably one more entree than was really necessary at dinner – and perhaps I’d say the same for those last two bottles of beer.

Up early and had a Western breakfast near our hotel. It was tasty – and, this being Singapore, pricey. Eh, what’re you gonna do?

Began packing back at the hotel, which stressed me out no end, thanks to Jetstar, our airline for today’s flight to Da Nang, sending me increasingly dire and alarming messages about weight restrictions for carry-ons and exorbitant fees for checked bags that exceeded weight allowance. I paid to add another 10 kilos of checked bags and then did my best to slim my carry-on bag down to the permitted 7 kilos. Christ, it’s really a fucking racket. Either the bag fits in the overhead (which mine does) or it doesn’t. Who gives a shit what’s in there? Not too mention that 7 kilos is very close to the weight of an empty suitcase…

On top of all the this, I’d developed some kind of rash on my feet – which I naturally assumed was bedbugs or scabies or some other equally awful malady. And the itch was driving me insane.

Our flight wasn’t until 6PM and at this point, we were just sitting around the hotel room with me becoming increasingly stressed out – so we figured we’d just head to Changi, which 100% deserves its reputation as the world’s best airport.

First things first, we got to Jetstar check-in and weighed our bags and redistributed things between checked and carry-on until we both had 7 kilos for the overhead and everything else checked. Needless to say, the extra 10 kilos I’d paid for was unnecessary since we were under our 40 kilo allowance. Oy, a racket, I tell you!

One nice thing though: there’s an urgent care clinic at the airport! I checked in and saw a doctor after a not-too-terrible wait. Diagnosis: atopic dermatitis! Which is really just a fancy term for “Yeah, that’s a rash.” But I got some steroid cream and antihistamines, along with the peace of mind that I’d not contracted an exotic parasitic infection.

Used my Priority Pass to treat us to a decent (and free!) Japanese bento lunch at TGM in T2, then hung out at the Dnata Lounge having wine until it was time to board. All went smoothly with boarding – and needless to say, no one gave my bag a second glance and certainly didn’t attempt to weigh it. I could’ve packed an anvil in there! Sigh. Well, as long as our checked bags have accompanied us to our final destination, I’ll consider the flying experience a success. Anyway, next stop Da Nang! 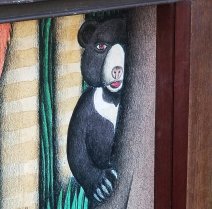 Me, seeing a couple fighting in public 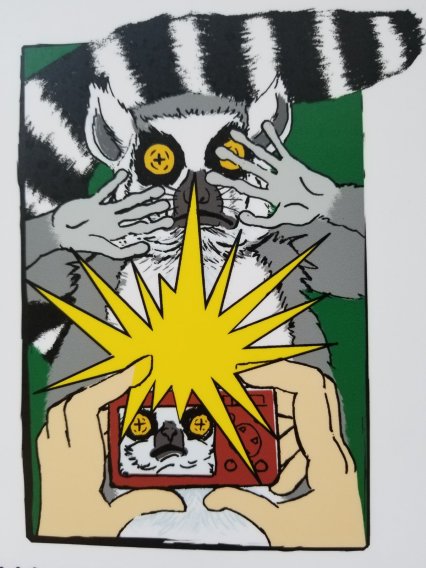 THIS IS THE LIFE 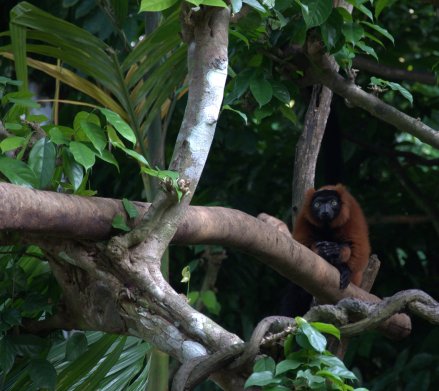 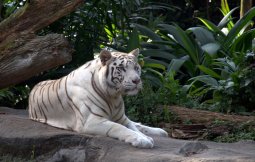 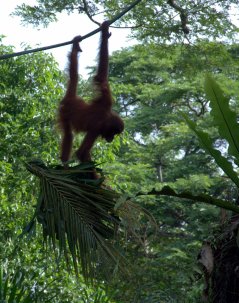 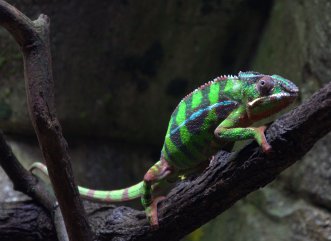 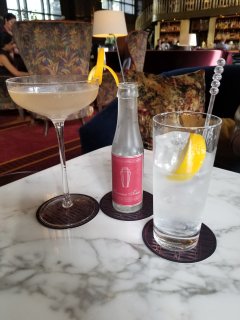 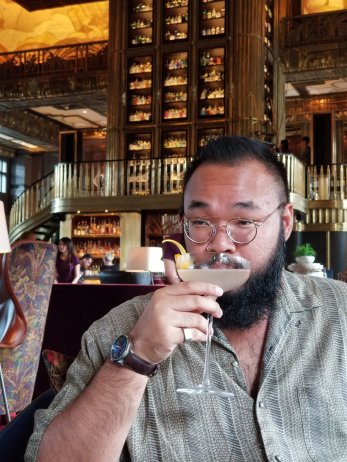 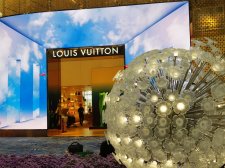 This is at the airport

Again, this is the airport. WTF?