Made our way into town to Hai Cafe, the meeting point for our cooking class with Red Bridge. Our morning guide met us promptly and we had something to drink while we waited for our fellow tourists, who turned out to be a couple of not-particularly-friendly Aussie women. They weren’t unfriendly, exactly, but were not especially interested in engaging with anyone but one another. NBD, though it was a little exhausting for me trying to do the heavy lifting to keep a conversation going until I just threw in the towel.

The first part of the tour involved a stop at a local organic garden, which was pretty interesting – though went on perhaps a bit longer than was necessary. Same could be said for our trip to the market, especially since we’d already been through it during one of our food tours.

Once we arrived at the Red Bridge School and Villa, things took a turn for the better. The setting was lovely and the outdoor cooking facility was great in terms of both the working space and all the fresh ingredients. Our instructor Mimi was great – gregarious and knowledgeable and enjoyed sharing her techniques and showing us what to do.

We started off prepping the ingredients for a banana leaf salad with grilled chicken. All the different fruits and vegetables in the salad were just gorgeous and the bbq’d chicken turned out to be as wonderful as it looked and smelled.

We also worked on broth for pho, grilling up beef leg bones over the fire before starting the soup. This was followed by prepping chiles and aromatics to make a marinade for shrimp that we wrapped in banana leaves before grilling. Then we ended with hotpot with fish and dill. Really tasty!

It was a fun afternoon – though it also seemed as if our two other students were pretty unfamiliar with cooking. Which is fine, I guess, but it seemed an odd choice of activities for them.

We’d done four different tourist activities while in Hoi An: two food tours, a cooking class and a bike tour. The cooking class and the second of the food tours were run/owned by non-Vietnamese apparently – and while I wouldn’t say they were terrible, they seemed to lack the local take that we enjoyed so much on our first food tour and the bike tour. The locally-run tours just felt more like we were interacting with Vietnamese folks on their terms and in a way that felt more personal. The other experiences felt more highly scripted and almost veered into performance. I don’t suppose there’s anything wrong with that – but it’s a type of tour that I find less interesting.

Took a boat back to Old Town and wandered for a bit. Back to hotel for a nap, then dinner again at Morning Glory. We probably should’ve tried somewhere new, but we’d really enjoyed the previous meal there, so why not go with a sure thing for our last evening?

Walked around after dinner. Hoi An is really quite magical in the evening, with hundreds of different colored lanterns strung across every street and building. It’s brimming with tourists, yet it still feels just delightful to be out and about.

We bought a couple of candles to float down the river, mainly because I was thinking of a good friend back home who will soon be saying farewell to her kitty companion. It was nice to be able to do a little something to keep them in my thoughts, but it got me a lot more choked up than I’d anticipated. Nevertheless, a very nice way to wrap up our evening.

Up and on our way to the airport by 9AM, despite a bit of a kerfuffle at check-out as to whether or not I’d pre-paid for our stay (I had), but it was resolved quickly. Hung out at the lounge in Da Nang, thanks to my Priority Pass and soon enough we were BKK-bound. Well, technically, DMK-bound – the LaGuardia to Suvarnabhumi’s JFK. But it was an easy flight and we were quickly in a Grab, headed toward Le Meridien, my home-away-from-home here in Bangkok.

Or is it? Check in was a bit of a bother when they charged me extra to “upgrade” to a room with a Toto Washlet (because who doesn’t love a Washlet?) – something they’d never done in the past when I’d requested it and this being my fifth or sixth stay here (and I’m a Starwood member), I was not pleased –  but I paid it and then sent an email along to the GM, sharing my disappointment. Happy to report, he got back to me the next morning to advise the charges had been reversed. Squeaky wheel, grease, etc., yes – but still left me with a rather less enthusiastic feeling for this hotel at check in, a hotel that I’ve been singing the praises of since my first visit a couple of years ago. Well, we see how the week goes.

Oh, and it’s Songkran weekend, the Thai new year and unofficial gay pride celebration. The streets in Silom are mobbed with folks armed with huge water guns and buckets as they participate in the nationwide water fight that rings in the Thai new year. And apparently, Le Meridien is also queen central, if the parade of toned male couples in tank tops and expensive sneakers were any indication – including two shirtless and soaking wet muscle queens and their water bazookas just chillin’ in the lobby. Fancy!

Dinner at the mall: great Thai food that we’d both been craving. Sure, we’d had plenty of great food in Singapore and Hoi An, but let’s face it: Thai food is best.

Also at the mall: a big Songkran circuit party – I shit you not. It was pretty hilarious seeing gaggles of queens in harnesses and booty shorts sashaying past Uniqlo and through the food court on their way up to rave the night away. Westfield Center take note!

Tomorrow: a visit to Old Town! 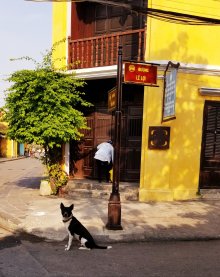 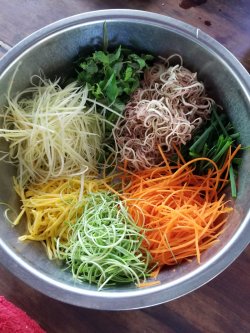 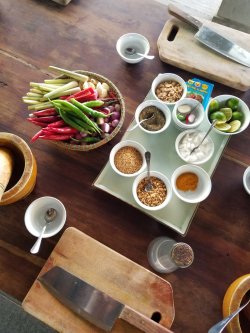 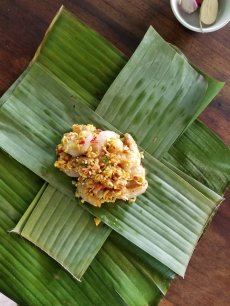 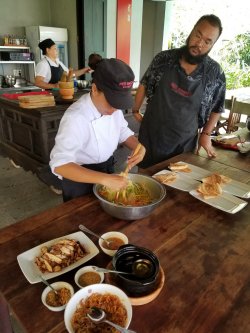 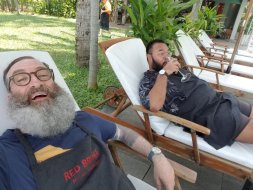 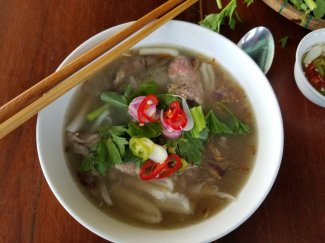 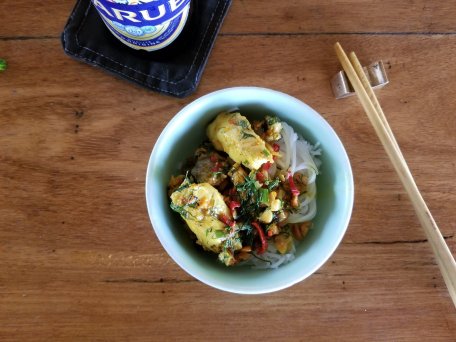 View from the bathroom! 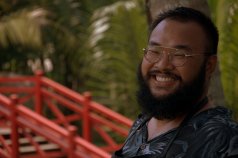 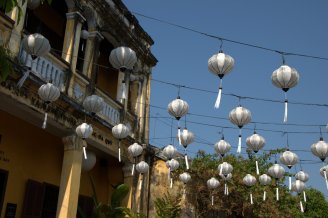 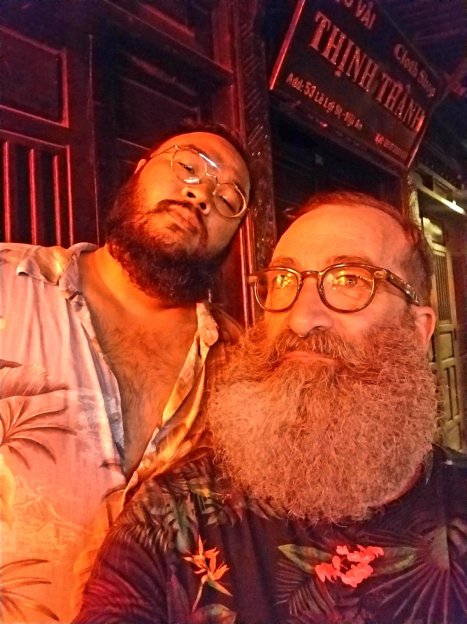 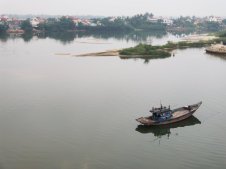 Morning on the river 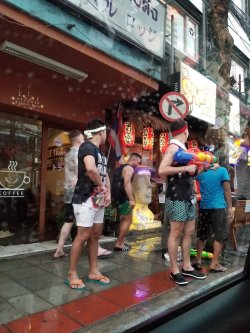