Said my farewell to David and soon enough, I was at the lovely-to-look-at-but-terrible-to-navigate Bilbao Airport – the most onerous part being the main entrance to the gates after security. There are three poles dividing the entry and the departure monitors are immediately inside – so every jackass stops literally blocking the door staring at the screen while the rest of the crowd bottlenecks behind. Really shockingly poor design.

Anyway, I hustled myself to the Sala VIP (thanks, Priority Pass!) which was not much to behold, but was a nice space to chill with a reasonable selection of food and drink. The staff were especially nice – actively shushing the loud-mouthed-English-speakers (not sure of their nationalities, but it was a bunch of 40-ish white dudes traveling on business, natch) as we rolled our eyes at one another in disdain. Perfecto!

Once it was time to board, it was at the dreaded remote gate. I’d booked on Iberia since it’s a “real” airline as opposed to the budget Vueling. WELL! My money was not well-spent! In addition to the 30 euro (!) charge to check my bag (and which I’m pretty sure wasn’t made clear during my original booking), they were VERY strict about boarding by group number – which normally I’d be a fan of (even though I was in the sad Grupo 4 this trip). However, they maintained this rule FOR BOARDING THE BUS TO GET TO THE AIRCRAFT! Once we were out there, it was every person for themselves. The whole process was ridiculous and the ground crew were pretty surly.

Once on-board, all was OK. There was one FA who was Not The One and honestly, I want her on every flight I take. Every time some dumb asshole put their backpack or tote in the overhead, she was all, “You need to put that under your seat. The overhead is for suitcases. Are you fucking stupid?” (I think I’ve translated correctly). There was a similar lecture delivered to jerks trying to put more than one piece of luggage up there too. She was as vigilant as an eagle and I appreciated that.

Initially, I thought the middle seat in my row empty – but there were still two more busloads of passengers to board and the flight was at capacity. But I had a quiet row – though the row across from me had a couple with their baby traveling in mom’s lap while dad had three different bags of food and toys to keep the little one occupied.

He was pretty cute and we played peek-a-boo throughout the flight. Little kids are typically either terrified or fascinated by my beard and he was the latter. I think I earned some good travel karma, as I made a small contribution to distracting him from crying over the hour-long flight. The parents even thanked me on the jetway in Madrid! Not all heroes wear capes…

Made my way to the Plaza Mayor Sala VIP in Madrid during my short layover (thanks again, Priority Pass!) and it was pretty nice! Good views of the tarmac, not crowded and a nice selection of drinks.

Boarding time again and my gate was naturally at the complete opposite end of the airport – and I was last in line save for a handful of other stragglers… Which was worrisome until I realized we were flying one of those commuter jets where you load your carry-on bag into the hold from the tarmac – so no fretting about fighting for overhead space.

In front of me while in line to board was rich-looking business fellow having a bizarre conversation with some other dude about the relative downsides of various violent methods of death. It was semi-creepy. And he literally never stopped talking the entire time we were in line and walking down the jetway and across the tarmac. And lucky me, he was sitting directly in front of me on-board. Thank Zeus for my noise-canceling cans!

Soon enough, we were on the ground in Granada and I made my to the Gar Anat Hotel, my home for the next couple of days. The place was very nice and my greeting from Lorena at the front desk was lovely. She was kind and helpful throughout my stay.

The next morning, I had to present myself at the entrance to the Alhambra at 8AM. Given that it was about a 30-minute walk, it was an early start to the day – so early, that I’d miss out on breakfast at my hotel, though Lorena had arranged for a bag lunch to be prepared for me which was great.

The walk up there was lovely and I arrived early which gave me a chance to take several hundred photos of a couple stray cats chilling near the gate. I found my guide Gabriella by the appointed time and was lucky that it turned out to be a small group.

I didn’t know much (OK, anything) about the Alhambra and Gabriella was excellent, thanks to her broad knowledge of both the history and architecture of the site. We spent most of the first part of the morning in the fort – which also had amazing views of the city of Granada and the snow-capped Sierra Nevada mountains.

We spent three hours visiting the complex, ending at the Generalife, the palace and gardens of the Nasrid rulers who built the Alhambra. And yes, it was lovely. In fact, while I understand the tour saving the best for last, it might’ve been nicer to start there, given that by the time we arrived the crowds were pretty intense by this relatively late hour.

Headed back into town after the tour and popped into Bodegas Castañeda where I had my first encounter with tapas as they are served in Granada – they’re included with your drink! I was a little confused at first. I’d ordered wine, obv, along with tortilla española and jamon iberico. I was presented with my tortilla along with a little slice of bread with some cooked ham and tomato sauce. I figured I’d mispronounced something when I ordered, so NBD especially since the ham was delicious. But then, I was brought my plate of jamon iberico – at which point I also ordered another drink and was brought a plate of chips and marinated anchovies. I finally figured out that with each drink, one is served a tapas of choice from the bar. As it turned out, this is the custom in Granada – and it’s one I can get on board with!

Anyway, had a little siesta back at the hotel and soon enough it was time for an early-by-local-standards dinner. I decided to check out El Bar de Fede, as it’s apparently “gay-ish”, if the internetz are to be believed. Well, I think they were referring to the very cute, very nice staff – at least one of whom I recognized from one of the “dating” apps I use. The patrons were a pretty standard crowd.

Happily, the food was quite good. I had albondigas which were very tasty – though sadly, only came in a full portion, meaning I both ate too much and didn’t finish. There are worse things in life…

The next day I didn’t really have anything on my agenda. In fact, I wasn’t sure how much I was enjoying Granada. The central tourist area around the Plaza Nueva is very touristy indeed and it felt very crowded.

But my first order of business was to find some breakfast – after poking around online, I found Café 4 Gatos which sounded nice. So, I followed my map and found myself walking up the hill along cobblestone streets lined with beautiful carmenes – the walled houses that make up this lovely part of the city.

The cafe was great – it seemed to be serving mostly tourists, but I bellied up to the small bar and had a simple and delicious tosta with ham and cheese, along with an ice cold Coca-Cola. Perfection.

After breakfast, I just wandered the neighborhood. It was really quite lovely and very quiet. Eventually, as I strolled past many lovely carmenes, I stumbled across one that had been the home of Belgian artist Max Moreau – and it was open to the public and free to visit.

WELL. I immediately fell in love with the place. Several small buildings made up the residence and his studio, plus a large lower garden and a smaller rooftop terrace – all with spectacular views of The Alhambra. It was such an unexpected experience and felt like I’d discovered a local secret. In fact, I saw a couple who’d I’d exchanged “hellos” with at breakfast as I left and I caught up to them and insisted they retrace their steps and visit! Yes, I’m a busybody.

As I kept wandering up the hill, I stumbled across one of the several spots in the neighborhood providing amazing views of the Alhambra and the mountains. My mixed feelings about Granada had obviously disappeared at this point. It was really good for me to spend some time in this tranquil and beautiful part of this city.

Spent the afternoon doing more tourist stuff – cathedral, museum, shopping, tapas – followed by a nap, then another dinner at the same place as last night. Why not make things easy on my last night? Tomorrow I’m off to Sevilla! 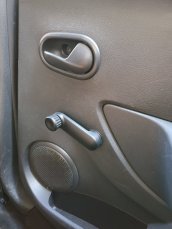 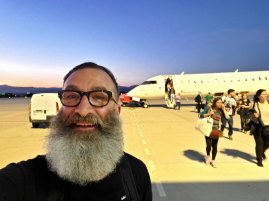 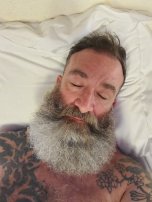 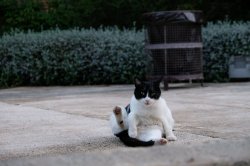 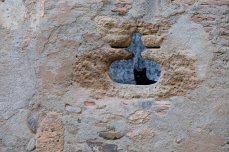 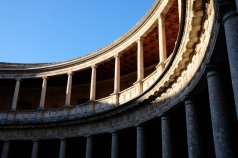 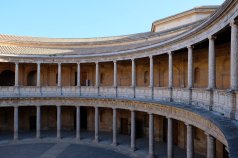 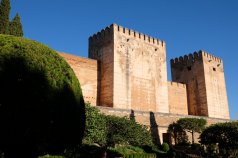 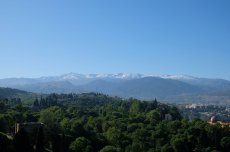 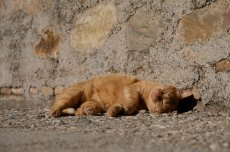 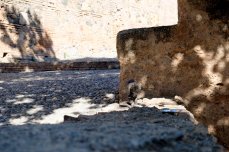 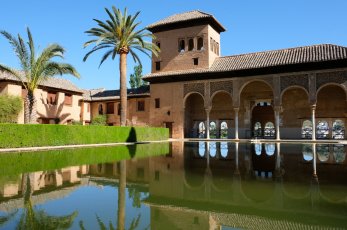 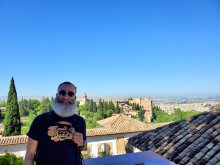 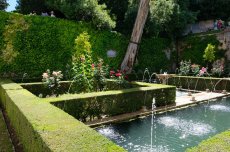 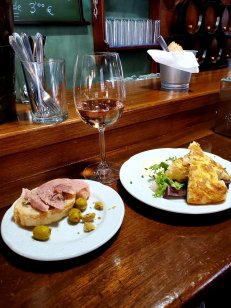 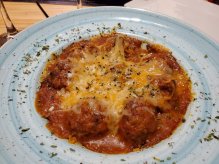 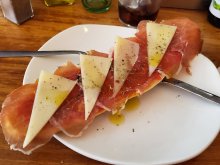 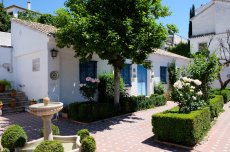 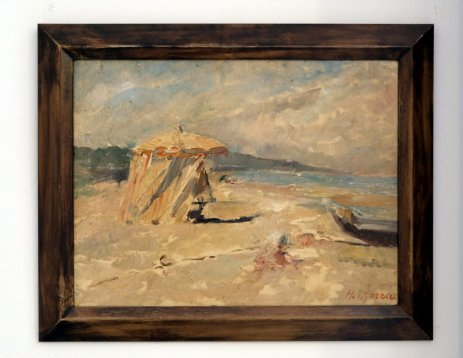 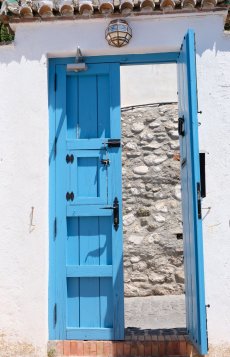 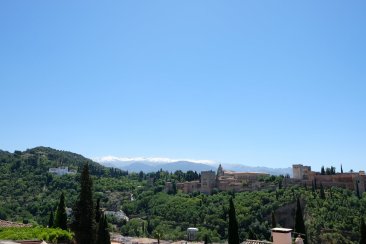