Up early the next morning and I took the ALSA Supra Economy bus to Sevilla. I’d’ve taken the train, but apparently track construction meant the train only went part of the way and then you transferred to a bus… A non-stop “affordable luxury” bus ride seemed preferable.

Took a taxi to my home for the next five days, the Rey Alfonso X, smack-dab in the middle of Centro. I followed along on Google Maps for the short ride – and I was pretty convinced once I got to the hotel, I’d never find my way out of this maze of narrow twisty streets.

The hotel was very nice – though I got not-so-great room. It was large-ish, with a separate living area – but it was in the basement and only had one window, which looked out on an interior lightwell. And the bathroom was on the other side of the living room and down three steps – making for quite a trek when I’d wake up to pee in the middle of the night. I mean, it was all fine – but I got to peek into some of the other rooms, which appeared a little smaller but filled with natural light and some of them looking out onto the plaza in front of the hotel. Eh, I didn’t come to Granada to sit in my hotel room anyway…

Once I’d settled in, I headed out in search of tapas – and I didn’t have to go far. There are restaurants everywhere! I chose a place with good online reviews that was about a two minute walk from my hotel. It was fine – nothing to write home about. I sat at the bar, next to a foursome of loud Brits and got to hear the following exchange.

Loud Brit, speaking loudly in English: “I’ll have a glass of rosé.”

Sigh… I mean he did say “thank you” – but would it really have killed him to learn the word “gracias”?

After dinner, I met up with some new friends I’d met online, an American couple – Ralph and James – visiting from Alaska, of all places. We met for a glass of wine at a place just around the corner from my hotel. Our itineraries had some overlap, so they shared some good tips on what they’d done so far.

The next day, I had a morning bike tour, which gave me a nice overview of the city and some much needed time in the saddle. The other riders weren’t the friendliest, but it was a small group and the guide was very knowledgeable. Several places would warrant a return visit on my own.

In the afternoon, I took a tour of the Alcazar Real. First off, some advice for anyone planning to visit the Alcazar: sign up for a tour! It’s worth every penny if only to skip the insanely long general admission line. Mine was with Amigo Tours and I really enjoyed it. The group was a bit on the large side – though we were all provided with headphones to listen to our guide, so it was easy to hear her descriptions of what we were seeing. She also pointed out my “twin” in one of the tapestries – some old guy with a crazy beard. I liked her.

The palace is quite beautiful – and the gardens even more so. TBH, my photos don’t do it sufficient justice – it’s an incredible place. Sadly, I probably didn’t spend enough time wandering the gardens – I think they were a lot more extensive than I’d realized. But it was already feeling like a long day – and Ralph and James had invited me to join them for a glass of wine, so…

I met up with them nearby and we ambled across the river and walked around Triana for a bit, stopping for a glass of wine and taking in local religious celebrations that filled some of the streets. We ended up back in El Centro and had a bite to eat next to the cathedral as dusk slowly settled over Seville. It was a lovely way to wrap up the day.

The next morning, I was up early and headed to the train station for a day trip to Cordoba, about a 45-minute ride on the high-speed AVE train. My visit coincided with Cordoba’s annual Patio Festival, in which locals open their beautifully decorated courtyards to the public and compete for the honor of best patio. I’d signed up for a tour and was very excited for this visit.

I met up with the group at the appointed location and the fellow leading the tour couldn’t find my name on his list of attendees. I was going to show him my email confirmation but he said it was no big deal and just come on along.

After about 25 minutes of walking and our guide sharing lots of details on the history of Cordoba, I wondered why we still hadn’t seen any patios – and experienced a sinking feeling as I began to suspect this wasn’t the right tour. I asked the guide and he confirmed that I was in fact on the free “Walking Tour of Cordoba” – not the patios tour.

He called HQ to figure out a solution – which consisted of giving me a location on a map and advising that I “might” find my tour group there. This was about one km from our current location. So, off I sprinted.

I have to confess, I was pretty unhappy about this turn of events. It was very tempting to just say “fuck it” and head back to the train station (or at least to get some wine somewhere) but I was really eager to take this tour, so I continued on my way, feeling quite confident that this was a wild goose chase and the likelihood of me finding my group was about zero.

I made my way to the location I’d been given (once again, thank you Google Maps!) and it was one of the patios. I poked my head in, looked around for the blue-shirted guide, asked one of the local fellows working there about any tour groups – and as I expected, no dice.

I walked up and down the street I was on, checking the vicinity and around the corners. No luck. What a shitty day this had turned out to be. Was trudging back the way I came, when I see a fellow in a bright blue shirt with the tour company name on it, along with a small group of tourists. I run up to him, panting, as I say, “PERDONA ME, ARE YOU ALEJANDRO?” Apparently, unused to sweaty, wild-eyed, hobo-ish foreigners getting up in his grill, he was a bit taken aback, but did confirm that he was Alejandro and that – miraculously – I’d found my group. Who’d’ve thunk it?

Spent the next hour-and-a-half walking the streets of Cordoba and looking at the beautiful courtyards all gussied up for the festival. It was an enjoyable visit – though the morning’s adventure had left me feeling a bit frazzled.

After the tour, I found a nice place to eat and had some albondigas and rosado – both of which helped my mood quite a bit. Got the train back to Seville and other than being very crowded, it was uneventful.

A bit later, I was wandering Sevilla trying to find someplace to get a bite. For whatever reason, this proved challenging – and given all the agita from my adventures in Cordoba, I was feeling a bit blue. I walked past a little tapas bar that looked nice but was empty and I felt a little weird about being the only patron, so I kept going. But then I said to myself, “Self, stop second guessing! Just go have a glass of wine and a snack.” And so I did! And what a great decision that turned out to be.

The fellow behind the bar at Taberna del Rey was so nice, not only advising me on the menu but tolerating my fractured Spanish. And the tapas were delicious! Started with a montadito stuffed with meat, along with an ensalada rusa – which is essentially potato salad with tuna added, so of course it’s great. Then at the barkeep’s recommendation, I tried what I think translated as “beef in red sauce” – a small dish of simple beef stew. The meat was tender and tasty and I loved it.

The place had filled up some and I’d also had a couple refills of my glass of rosado, so I was feeling AOK and a bit loquacious – sufficiently so that I struck up a conversation with the English-speaking couple sitting nearby, recommending the beef stew. Turns out they were New Yorkers and had visited some of the same places I’d been, so we had a really nice time trading tips and experiences.

Anyway, this turned out to be one of my favorite evenings in Seville, bringing together all of the things that make travel fun: meeting new folks, trading stories and good food and wine. What more could I ask for?

Spent the remainder of the weekend wandering Sevilla. Well, except for Saturday evening, which I spent watching Eurovision Song Contest on my laptop while gossiping/criticizing with one friend in Milan and another in Zurich. I’m so international!

My visit to the Plaza España was a little intimidating at first, as there was some sort of military ceremony being set up – which meant the plaza was densely populated with Spanish soldiers, many of them carrying large automatic weapons. So, yes, a little daunting – but who doesn’t love a man in uniform? It also helped that many of them were bearded and beefy. <fans self>

I walked past an outpost of El Corte Inglés, Spain’s only remaining department store. Sadly, they were closed on Sunday so I didn’t get to visit – but I will say this: their building in Sevilla is a really cool ’60s style and their mid-century logo is an amazing bit of design.

Another stop over the weekend was at the Museo De Bellas Artes De Sevilla. I was actually just looking for someplace to kill a bit of time – and what a good choice it turned out to be! Housed in a beautiful old palace with many courtyards, the collection covers several hundred years of Spanish arts.

I recall specifically walking into one large gallery, filled with large-scale paintings, only to find my eyes drawn immediately to a smallish portrait of a bearded man. Turns out, this was my first encounter with El Greco and it was a portrait of his son, Jorge Manuel. It was exquisite – and made me all the more eager to see more of his work when I get to the Prado in Madrid.

As much as I was eager to see Madrid, saying goodbye to Sevilla was not easy. Truly one of the most beautiful cities I’ve ever visited: amazing architecture everywhere along the charming little streets winding through the center – plus great food and friendly folks. I hope I’ll be back again soon. 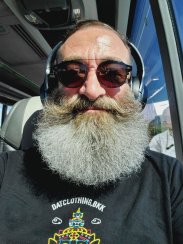 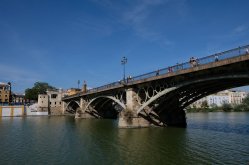 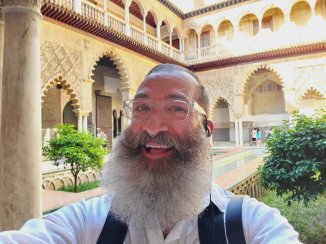 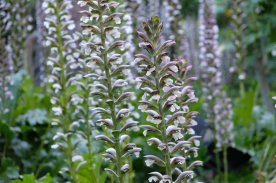 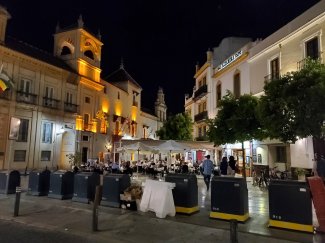 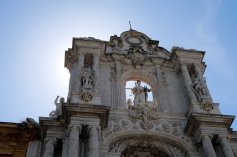 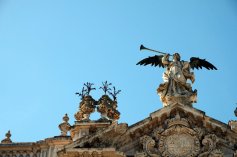 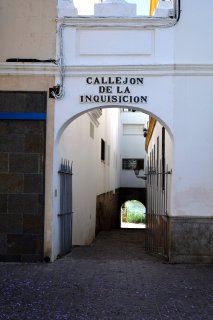 No one expects it… 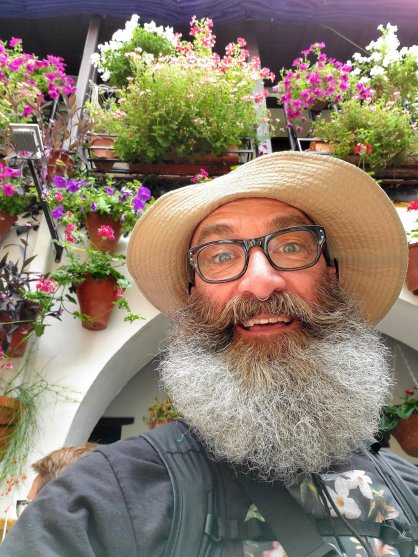 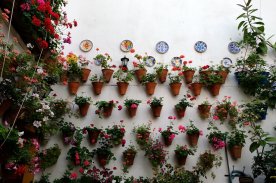 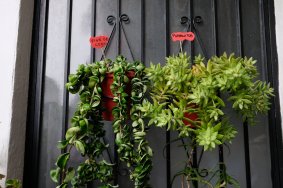 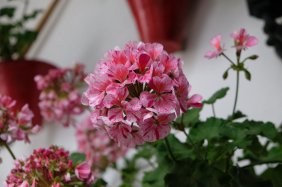 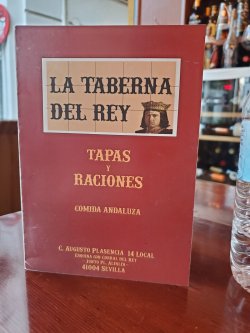 My favorite spot in Sevilla 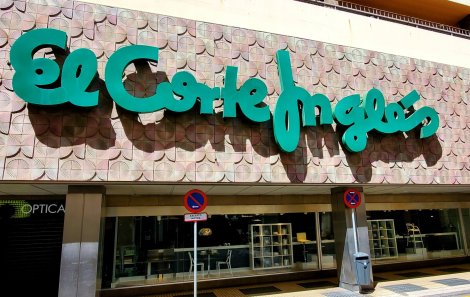 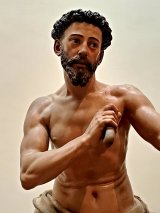 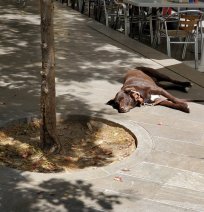