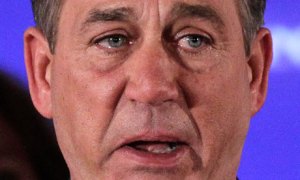 Can you imagine the howls of derision and scorn from Fox News et al. if Nancy Pelosi had spent her tenure as Speaker of the House sobbing? But John “I’m Not a Carrot” Boehner (pronounced “BONER”) is turning on the waterworks left and right and apparently it’s AOK.

Gail Collins had this to say in her column:

In 2007, he cried while delivering a speech on the floor of the House, in support of funding for the war in Iraq. “After 3,000 of our fellow citizens died at the hands of these terrorists, when are we going to stand up and take them on?” he sobbed.

Then this year, he voted against providing money to take care of our fellow citizens who became ill while doing rescue and reclamation work at ground zero after the terrorist attack.